You are here: Home / Budgeting / How to get kids to do chores + teaching kids about money

We may earn money or products from the companies mentioned in this post.

It’s really important to teach kids about money. The general state of money handling in our culture is just bad. It’s our job to teach our kids how to handle money. I am frequently asked “how to get kids to do chores??” Honestly, my kids do chores because I tell them to. More specifically, my kids do chores because they have grown up doing chores and they don’t think anything of it. They know that chores are a part of life, and they accept that. Has it always been that way? No.

I read a staggering statistic that said only about 30% of kids do chores at home. I can’t remember the exact number, but it may have been less than that. This seems absurd to me. It’s no wonder that we as a society are producing lazy adults who want everything handed to them. If you don’t agree that kids should do chores, well, this blog post probably isn’t for you! We can agree to disagree, and maybe you’ll find value in some of my other blog posts.
I believe that chores are essential for teaching kids basic life skills, but also in teaching them about money. My children have always done chores, but we recently developed a system that has been working a little better than before. The system that we are using is actually based on the book “Smart Money, Smart kids” by Dave Ramsey and Rachel Cruze. If you’ve read much on my blog, you probably know that I am a fan of Dave Ramsey. I might not agree with him on everything, but he is one of the most respected names in finance for a reason. He knows what he is talking about!
Just a side note, if your own finances are a mess, it’s probably best to start working on that before you worry too much about teaching your kids. Kids learn so much from watching you, it’s important to get this step done! If you haven’t read “The total money makeover” it’s a great place to start. You can also learn Dave’s “baby steps” on his podcast or YouTube channel. Also, check out my “How to start a budget” post for some starter info. It’s the first part of my budgeting series and it is for total beginners.

In the Smart Money, Smart kids book, Dave and Rachel suggest using a “commission system” versus an “allowance.” A commission is being paid for work that is completed, whereas an allowance is simply getting money for the sake of getting money. We don’t call it a “commission” in our house (we just call it “chore money,”) but this is the system we use.
The amount that you pay your children is completely up to you. We decided on $5 a week for the eight and five year old. Dave recommends dollar bills for kids who are five and under, but that sounded expensive to me. My three year old loves quarters, so he gets his quarter “chore money” for doing small things like picking up his toys. I also have a confession to make: sometimes I give him nickels if I can’t find a quarter. He doesn’t seem to mind.

Money is a great motivator. I have one child who will do anything that I ask them just because I asked. There is another child in our household who is a bit more dramatic. They might act like putting their clothes away is fate worse than death, in fact, they have! The whining is much better since starting the “commission” system. They know that whining means earning less. Yes, I made that a part of the rules, I am mean.
So the best answer to “how to get kids to do chores” is simply putting a system in place and enforcing it. It may look different in your house than it does in mine, but the principals are the same. Decide on an amount to give the children weekly, with the stipulation that their chores must be done. We don’t have a specific chore list, we just do what is needed on a daily basis. If you wanted make a chore list, that would be fine too. We did that for a while but it got to be a hassle on days where certain chores didn’t need to be done.

What kind of chores should kids do?

Appropriate chores for children will vary from child to child. Age and maturity are the main factors. You can’t expect the average three year old to wash dishes, but an eight year old should be able to load and unload a dishwasher with ease. Chores can also be based around interests, so if you have someone who loves to fold hand towels or vacuum, let them do that chore. I’m not saying that kids will always like their chores, but if there is a specific chore that they enjoy, let them do it! I wrote a list of age appropriate kids chores, plus a free printable!


Even if you don’t believe in the commission system or an allowance, I believe kids should do chores either way. I think it’s good for them to realize that these tasks have to be done. There is no magical elf in our house who cleans everything, and I doubt you have one either! I believe that doing chores teaches kids important life skills. You should never be an adult who doesn’t know how to do basic chores, and unfortunately that actually happens. Chores can help build life skills, and teach kids the value of money.

When it’s easier to do it yourself

It can be difficult to let kids do chores when it’s easier to do them yourself. Unfortunately, it’s almost always easier just to do the chore yourself. Chores, like anything else, have to be learned and the kids will get better at them. The best way that I have found to do this is to help them the first few times. After that, offer guidance, but have the kids do the chores themselves. They will eventually get better.
I once read that all kids should start making their own beds at the age of five. The article said that it will take a couple of months, but the kids will eventually do a good job. This concept will apply to any chore. Kids may need extra encouragement, don’t do things for them just because they don’t do them correctly. For some kids, this will cause them to do it incorrectly every time in hopes that they won’t have to do it anymore.

What do chores look like in your house? Do you give your kids an allowance, or use a commission system? I’d love to hear what you have to say in the comments. If your curious about teaching your kids about money, I’d highly recommend checking out the book that I mentioned earlier in the post.
P.S. I realized that this post sounds like a big promotion for Dave Ramsey, so I wanted to balance it out. I will say that I do not like the EveryDollar app and I don’t recommend it for budgeting. Check out my how to start a budget post for what I do recommend. 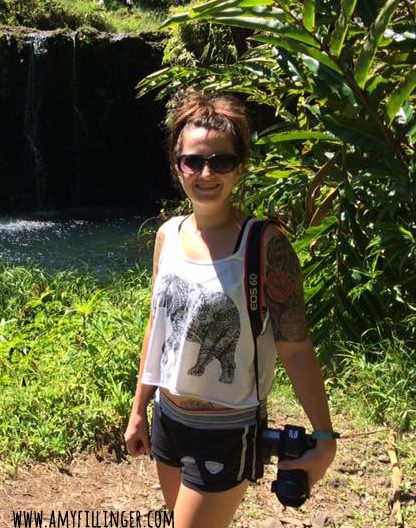 I’m a busy work-at-home mom of three. I know that it can be challenging to balance work, family, health, finances and your household. I’m on a journey to figure out this life balance thing and be as productive as possible. I hope you’ll join me! Find out more about me  here.